You can find the latest about COVID-19/Coronavirus here.
Click here for Business Assistance Programs 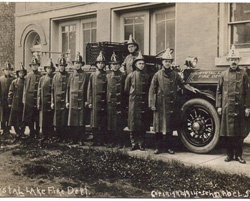 In December of 1913, the Village Board of North Crystal Lake passed an ordinance to create a volunteer fire department. The Village needed an organized fire department that would hold regular meetings, practice fire drills, and work together in times of emergency.

“The Herald believes that there will be no difficulty in securing such men, and is confident that the establishment of such a department was a wise move on the part of the board.” - Crystal Lake Herald

Fire Marshal Paul Bertram resigned on March 1, 1918 to become the Deputy Fire Marshal for the State of Illinois.